Dustin Laird is the planting pastor of Redemption Community Church in Surrey, BC, Canada. He was among the second graduating class of Northwest Baptist’s CBTE-based degree Immerse in 2017.

CBTE News: Why did you enroll in the Immerse program?

The Immerse program came along at just the right time to guide me through what would be a number of years of learning and development. The church planting journey was not one I expected to be on. I was sure the Lord had called me to it but I was up to my neck in it. Immerse was crucial to my ability to carry-on in the role that I have.

The opportunity to be in the midst of ministry at the same time as learning the theological and skillful aspects of ministry was invaluable. I had considered staying at Bible College and carrying on from my bachelors into a masters. But, as I had some classes that overlapped with students in the masters programs, I realized that what they brought to the classroom was an entirely different perspective. They had real-life ministry experience and were able to think critically about the material and how it interacted with what they had actually experienced in ministry. As someone who had no ministry experience, I thought I could just take in the academic information and quickly get it done. I learned I needed experience to push back against the material and think critically about it.

CBTE News: What did you receive from Immerse that you would not have gotten in a conventional seminary program?

Maturity. As someone lacking experience in pastoral ministry, I thought I had a bag of tricks that I could use for a while to endear the people to me. But as I began to serve in ministry, I wanted more than to endear the people to me. I wanted to lead God’s people. I wanted to care for them well, to be theologically responsible in my opportunity to lead them. I realized quite quickly that I would come to the end of myself and need to rely on the Lord, having an ongoing posture of learning. I recognized that with all my shortcomings and faults, the Lord had called me to this task and that I was sufficient for the task as long as He was the One who was leading me step by step. Without Immerse, I don’t think I would have been able to sustain a proper attitude and a real usefulness in ministry – even this beginning stage of ministry. I would have been far too self-reliant and I would have run out of what I had to offer the people.

CBTE News: One of the core elements of Immerse (and many other CBTE programs) is training under the guidance of a mentor team. What was that experience like for you?

Incredible! I had a team of mentors around me that I knew would take my calls and have wisdom to offer. I wasn’t cycling in and out of the lives of professors who didn’t know me particularly well. Instead, I was able to go to leaders who had not only earned my trust and respect but personally knew me. They knew both my strengths and my weaknesses and were able to guide me in light of those things. In one instance we faced difficulties in the life of the church that needed to be tackled head-on. My mentors knew that approach wouldn’t be my tendency and were able to guide me through this situation because they knew me very personally.

CBTE News: What have been some of the lasting effects of the program that have stayed with you even after graduation?

I didn’t have much of an interest in learning prior to the Immerse program. I had done my first degree and was quite content to see where that would take me. But throughout the program, I fell in love with learning. I learned how to direct my own self-development. Even just a few weeks after graduation I made a plan of where I wanted to continue to grow and how I was going to engage with that. I wrote up a plan and gave it to some of my leadership team to help me. The desire for continued growth is definitely a lasting effect.

The program and my involvement in it has been invaluable for me personally and spiritually; for my character growth, for my confidence in ministry, for my sense of calling, for my competency in being able to do what I do, for me as a man of God leading my family. I attribute so much of my growth over the last few years to the program and those who surrounded me in it. I truly think that my longevity in ministry and my sustainability in it is in large part due to what this program has given me as a foundation. 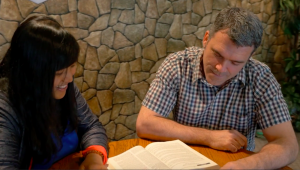 Paul Olson is the Pastor of Burnett Fellowship Baptist Church in Maple Ridge, British Columbia. He served as the ministry mentor for Glory Destura, one of the first students in Northwest Baptist’s CBTE program, Immerse.

In the Immerse program, each student is taken on by a church in a long-term leadership development role, and assigned a 3-person mentor team comprised of academic, ministry (practitioner) and network (denomination) mentors. We asked Paul to reflect on his experience as a ministry mentor.

How did you come to be involved with the Immerse program?
I received a phone call from [NBS President] Kent Anderson telling me the school was trying a new type of church-based education program and had a student who would be a great fit in our church.  Our church board was keen for us to to participate, as we believed mentorship was an important way to multiply leaders.

I already knew Glory from when I had served in another church, and could never have pictured her in a traditional masters program. I don’t think that would have been something interesting to her at all. But Immerse crossed our paths and we began a journey we wouldn’t trade for anything. It was hard but it was good.

You say, “It was hard but it was good.” That’s from your perspective. What about for the rest of the church?
It was great. Her involvement came at a perfect time for us. I was transitioning out of family ministry and starting a lead staff role, so Glory stepped into my former role. Glory is very capable and the church took her under their wing and loved her immensely. She did a great job. She loves kids and has a heart for children. That made it easy for us.

The program was hard for Glory. She didn’t see herself as a student. She didn’t love to read. She didn’t love to write. But she loved to do the ministry. So that’s what enabled her to keep going. She got a better balance in ministry and was challenged in many areas. She tried to quit many times but I always responded, “I’m not letting you quit. I’ve invested too much into you and you’re going to carry on.” And rightfully so. I think for her to finish was very important – even though the degree was less important to her than what she was learning.

You talked about the investment you made into Glory and the program. Was it worth it?
I think it was worth it because now we have someone (on staff) we have invested in. The culture of our church is very much part of her life, and we had no hesitation to hire her after graduation. Absolutely no hesitation. We invested in her and now we are reaping the dividends. Her education is deeper. She has an M.Div., and learned a lot in that process. We got more than our money’s worth in the end, and all the way through, to be perfectly frank.

Glory had skills, even at the beginning, so we actually got a lot of value from her right from the start. The financial cost wasn’t really a burden for us, but the cost in time-–that was a lot. We were deeply committed and willing to work through every aspect. And she did it. She pulled it out. Her debrief at the end was powerful. She gave illustration after illustration of how the experience had changed her and improved her ministry capacity.

Why didn’t you as a church just bring on an intern and train her in the church? What did you gain from partnership with the seminary and the denomination?
We had done that before with others. I had also led a mentorship program with some of the young adults. There was some value in it, but the challenge was it needed more structure. We needed input from outside our church to provide a well-rounded view.

I don’t know how many times (academic mentor) Brian Rapske pushed back on Glory and say, “Well what about this? Have you thought about this?” I wouldn’t have pushed back on those things. We needed that. We needed someone with those skills on the team. And I needed (network mentor) April Christenson to bring the larger denominational perspective. The (academic) structure of learning units and assignments was very helpful, as well as having different voices challenge her.  I think the partnership helped her have a better, well-rounded curriculum.

How would you compare Glory’s education to yours?
I came out of Bible College with about 80% theological knowledge and 20% practical knowledge– if that. I got eaten alive – as did my fellow graduates. I’m actually one of the few that actually survived in ministry. I found my education irrelevant in so many ways because it didn’t prepare me for what church ministry was like.

That would have been true for Glory. But the practical aspects of Immerse helped her to understand, balance, and learn as she went along. I do think we are serving our churches a lot better by preparing students who are well-rounded and know what it is to do relational ministry and theological ministry.

Glory has learned a lot of that. She has been forced to learn a lot of theology that she didn’t necessarily seek out. But it was important. Theological grounding is important. But she learned it in the context of children’s ministry. She learned why she needed to know – and to teach – the whole process of sanctification and the role of the Holy Spirit. She was able to see what it could look like in children’s ministry. And it made far more sense to her because she saw it in practice. That is what I wish I had far more of when I was a student. We did field education but it was nothing compared to this kind of stuff. This has a great edge to it that resonates with a lot of people … and a lot of churches as well.

Glory has graduated and you have a second student about half-way through. Do you expect your church will bring on another Immerse student?
Absolutely! We are planning to bring on another student. I’m thrilled with the program. It’s really grown well and I know it is always under revision, which it needs to be, but I’m thrilled with it. We are in–hook, line and sinker–because I think the program has huge potential for helping us grow our church, as well as others.